If you’ve been following retirement stats in the news lately, then you know things aren’t looking good. As millions of baby boomers are now reaching retirement age, a growing number of people are realizing they don’t have enough money saved. Take a look at a few articles we found on retirement, and what you should do about it.

1. 5 Facts About Retirement That Will Shock You

“The once mighty dollar no longer goes as far as it once did, as a result of the loose monetary policies from the Federal Reserve, and 40% of baby boomers now plan to work until they die.”

–I don’t think baby boomers are ‘planning’ to work until they die; I think they simply have no other options. When the majority of Americans are living paycheck to paycheck, it’s hard to plan for a financial future 15, 10, even five years down the line. No one plans to work forever, and no one intentionally falls in debt.

“One-third of U.S. homeowners between the ages of 30 and 59 won’t have enough money for retirement, even if they work until they’re 70.”

–Now this is scary. Basically, it doesn’t matter how much or how often you work, because salaries and wages are increasing at a much slower rate than living costs. Did you know it costs over $240,000 to raise a child these days? Take a look at our article on the cost of raising a child for more info.

“The oldest baby boomers have already turned 65, and the older population of the U.S. is beginning to swell. The age-65-and-older population grew 18 percent between 2000 and 2011 to 41.4 million senior citizens, according to a recent Administration on Aging report. And these numbers are expected to further balloon over the coming decade as baby boomers continue to reach traditional retirement age.”

–We’ve all heard how Medicare is running out, future generations are going to be broke, etc. Well, as stark as these forecasts are, they’re pretty accurate. Studies show that most retirees rely on Social Security as the crux of their retirement income, which means that the amount of funds available for future generations is going to be less—a lot less—than it is today. Just another reason why it’s so important to start saving as soon as possible.

4. Retirement: Then Versus Now

“Retirement experts say there’s a growing gap between the amount of money people need to retire, and what they actually have in the bank. The Center for Retirement Research at Boston College measures that gap with its National Retirement Risk Index, which estimates the portion of working-age families that are at risk of being unable to maintain their standard of living in retirement.”

–As more and more people are reaching retirement age, there’s a greater need for financial security. Unfortunately, most people are content merely living on a check to check basis and only realize they need help years down the line.

Saving for future can be hard when you’re struggling to find the means to make it through the month. That’s why it’s so important people take action now rather than later. If you’re among the millions of people who are struggling to find the means to retire, don’t wait until you’re over your head in debt. Secure your future today by learning how our debt consolidation services can help you get out of debt. 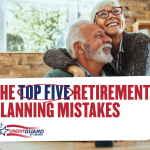 Finance Fridays: How to Be Smarter with Your Money