A Brief History of the Credit Card

Did you know over 10,000 credit card transactions take place every second?

Though it seems like just about everyone owns at least one credit card today (it’s actually estimated that the average American owns around three credit cards), it wasn’t that long ago when paying with plastic was simply unheard of.

Trade: The Origin of Currency

Before the emergence of coins, purchases were made by ways of trade and/or bartering. As our ancestors became less nomadic and instead began settling down, livestock quickly became the sole means of exchange. Not long after — with the rise of agriculture and farming — crops became the next preferred method of tender.
Although various forms of credit have been used throughout history, the whole idea of the ‘credit card’ is relatively new.

The first written account of money as a means of a physical exchange dates back thousands of years, but the whole idea of cold hard cash (and by cold hard cash I mean coins made out of precious metals like gold, silver and obsidian) has been dated back to around 2,000 B.C., where metal currency was found to be used in ancient Babylon, among other civilizations.

The Evolution of Credit & John Biggins

Biggins worked at Flatbush National Bank, and his credit system worked as a link between the bank and its customers. Although the idea was incredibly successful, there were two major caveats: 1) card owners had to be bank members, and 2) people could only make local purchases (since every purchase had to go through the bank itself first).
While Biggins was hard at work trying to perfect his “Charge-It” system, another type of card was coming into play.

A few years after Biggins’ invention, the Diners Club card was created and immediately caught the eye of nearby bankers and investors.

Invented by Frank McNamara, who was also the Diners Club co-founder, it was created with the sole intent as an easy way to pay for restaurant bills. As various sources suggest, the idea for the Diners Club Card was sparked when McNamara was having dinner with a few clients and coworkers. When the bill came, McNamara reached for his wallet, but to his dismay realized he had forgotten his cash at home. Terribly embarrassed, he had to phone his wife to come pay the tab.

The next day McNamara began thinking about a way to simultaneously make payments easier and help avoid similar embarrassing situations. Hence the Diners Club Card, which, believe it or not, could only be used at 27 participating restaurants.

All That Followed: Modern Credit Cards

Apparently, the Diners Club card was a huge success, and not long after, American Express followed suit and created their own credit card. Not far behind was Bank of America, who issued their own card later that same year.

Both credit cards immediately gained popularity—leading to the American Express card becoming the most popular card in the country. Today, credit cards have become the most widely used monetary system in the world.

Just as the credit industry boomed throughout the 20th century, payment methods have boomed in the 21st.

Today, credit cards still play an integral role in commerce, but their look and feel are changing rapidly. One of the biggest changes to the experience of buying is with the advent of smartphone technology. When Apple rolled out the iPhone in 2005, they had not at the time anticipated the fact that their “iPod that could make phone calls” would revolutionize so many aspects of our daily lives.

A big part of that is mobile wallets. With a smartphone, you can load your credit card information onto the device and use that information to make purchases online. You can also use payment apps at cash registers today, so instead of pulling out your credit card, you simply tap your phone on a reader.

The Danger Behind “Easy”

This convenience comes at a price. Today, it’s so easy to spend money that yours is often gone before you see it (literally in the case of wallet apps and even virtual currency).

This can make it hard to stick to a budget, for one thing, especially when impulse buys have never been easier. That easiness has led to a sharp uptick in the number of people in debt in America as well as an increase in average credit card debt. It’s no wonder that, despite so much progress since the Recession, so many people are still struggling. But it doesn’t have to be this way.

If you’re currently dealing with a debt situation that you can no longer manage, you’re not alone. Call CreditGUARD today to learn more about our nonprofit debt solutions including debt management and counseling when you speak to one of our certified credit counselors at 800-500-6489. 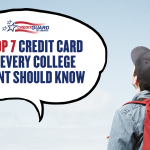 The Top 7 Credit Card Tips Every College Student Should Know

How the DARK SIDE Controls your Credit Card Destiny

Ten Things You Should Never, Ever Charge on Your Credit Card

Having Trouble Keeping Up with Your Multiple Credit Cards? Learn Which Ones to Pay off First